The Toyota Yaris GR is the sporty eye-catcher from 2020. The small car with a 1.6-liter turbo three-cylinder has a lot of power and is very popular with motorsport fans. Engine tuning gains even more potential from the small car: The two new tuning systems from DTE Systems enables a higher power output and faster throttle response. The performance upgrade of the PowerControl and the PedalBox offers full control over the various performance ranges of your vehicle. For all racing enthusiasts, a Racing Edition of the PowerControl is available, which brings even more power and dynamics to the Hothatch. Thanks to a smartphone app, the engine tuning system is easy to operate. Just like that you can always adapt them to your current driving style. The two tuning systems from DTE can be installed in all Toyota engine compartment or on the accelerator pedal in next to no time and are immediately ready for use. 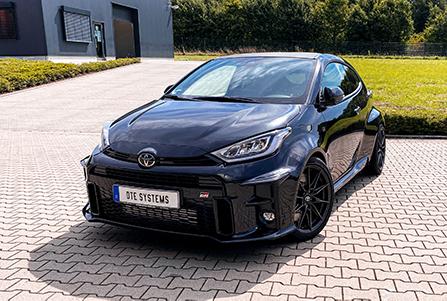 Toyota Yaris GR on DTE's tuning bench
PowerControl from DTE optimizes all signals from the engine management and harmonizes all control parameters as good as possible. Therefore, your Yaris is perceptibly more powerful and the fuel consumption can be noticeably reduced. You get maximum efficiency with maximum driving pleasure. In addition, you can always keep an eye on the most important parameters of the performance areas and synchronize them. DTE’s PowerControl is very simple to install in the engine bay and is immediately ready for use.

PowerControl - performance in the Toyota Yaris GR via smartphone 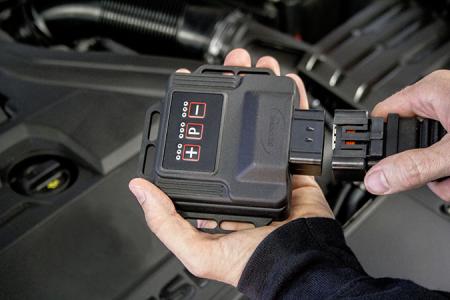 PedalBox with app for your Toyota Yaris GR
Experience driving without having to wait when driving off or accelerating: with the PedalBox from DTE Systems. You can switch between different programs in order to adapt your Toyota Yaris GR effectively to your current driving style. In three simple steps the tuning is connected to the gas and immediately ready to go. With the PedalBox, choose between the Sport, Sport Plus or City program and benefit from more fun while driving thanks to modern throttle response controller. Granting you even more driving pleasure. 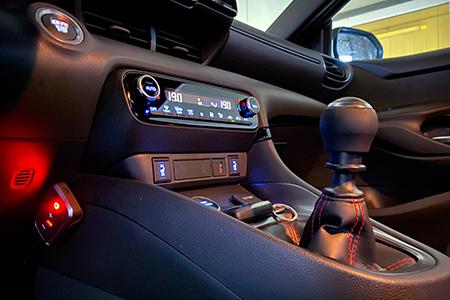 Operational safety is the top priority for DTE tuning products. With the latest technology of all additional control devices, all protective functions of the motors are retained and the legally prescribed emission values are not affected. To increase performance, all new DTE developments and products are checked using different test vehicles and in accordance with standard test methods on the in-house MAHA dynamometer. DTE Systems also offers a satisfaction guarantee and comprehensive 2 years product warranty which can be increased to an optional 5 years product warranty for all your Toyota Yaris GR tuning purchases. Further information on the warranty certificate is enclosed with the product.

With 5.5 seconds from 0 to 100 km/h and 261 hp at 360 Nm, the Toyota Yaris GR wowed the motor scene as a small car. Under the umbrella of Toyota "Gazoo Racing" (GR), the Toyota Yaris appeared as something quite unique for the group. The WRC rally team coaxed the performance of a race car out of the sporty small car with a 1.6-liter three-cylinder turbo engine. Among other things, the Japanese engine was equipped with piston crown cooling and large exhaust valves. In addition, the power dwarf has a lot of differentials in the all-wheel drive train. As a result, it not only shines with speed and power but also shows precise handling with enormous agility and traction. All in all, the dynamic super sports car weighs in at 1,280 kilograms. This means that with a power-to-weight ratio of 4.9 kilograms per horsepower, the small car achieves a maximum speed of 230 km/h and enormous acceleration, which takes place over all wheels. This is made possible by the bodyshell, which is predominantly made of aluminum. Nevertheless, the power delivery is rather linear. The Toyota Yaris GR is shifted via 6-speed DSG. The sound of the small super sports car is, however, only artificially generated via the cockpit, but still mighty loud for the racetrack. To make the Yaris GR ready for track and rally, it has been equipped with three different modes that change the driving dynamics and the drive: In normal mode, the Yaris remains rather front-heavy despite all-wheel drive, while track mode provides a balanced driving experience. Approximately 50 % is on the front axles and 50 % on the rear axles. In Sport mode, 70 % of the power is on the rear axles, which is why the power dwarf does not show any signs of breaking out to the rear even here. If the driver pulls the handbrake after unlocking, the drive of the rear axle is decoupled and the brake locks the wheels, allowing the Toyota Yaris to drift into the next corner - a true racing athlete among small cars.

DTE's Toyota engine tuning is available for the following models: