VW T5 and T6 Chiptuning - Increase the performance of your transport

The combination of two new tuning systems gives you more power and optimum acceleration for your VW T6 or VW T5. The PowerControl and the PedalBox give you full control over the different power ranges of your vehicle at all times. Thanks to a smartphone app, the engine tuning system is easy to operate. The VW T6.1 2.0 TDI, for example, gets +33 hp and +60 Nm and comes up with a powerful 204 hp and 450 Nm. This way, you can always adapt your tuning to the current driving style and even save up to 15% fuel. The two tuning systems PowerControl and PedalBox from DTE can be installed in the engine compartment or on the accelerator pedal in no time at all and are immediately ready for use. 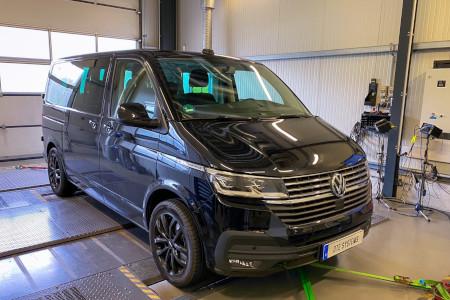 Performance measurement on DTE's test bench for VW T6
PowerControl X can be installed in the engine compartment in no time at all and is ready for immediate use. The quality module from DTE optimises all signals from the engine management system and matches the control parameters in the best possible way. This gives your MultivanT6 noticeably more power and fuel consumption can be significantly reduced. You get maximum efficiency with maximum pulling power. At the same time, you can always keep an eye on the important parameters of the power ranges and coordinate them with each other. The PowerControl X module comes with a comprehensive warranty.

PowerControl - performance in the VW T6 via smartphone 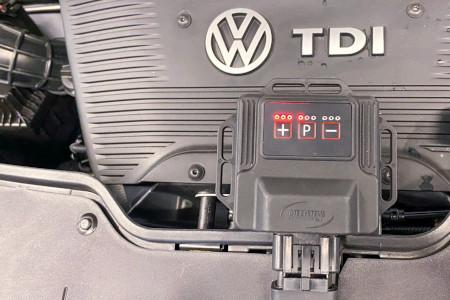 Chip tuning PowerControl with smartphone control for VW T6
The PowerControl X performance enhancement can be easily controlled via your smartphone - and relaxed from the cockpit. With the app from DTE Systems, you retain complete control over the various programmes at all times and can adjust them to your personal driving style before every journey. In this way, you can significantly improve performance and noticeably increase speed when accelerating. The app is very easy to operate via touchscreen: With a swipe across the mobile phone display, you can instantly switch between Sport, Dynamic or Efficiency programmes. You can activate or deactivate the additional power of PowerControl X as required. You can view all of your vehicle's performance data directly via the smartphone app.

PedalBox in the T6 - better acceleration

Gas pedal tuning PedalBox with app for VW T6
More power when starting: thanks to the PedalBox from DTE Systems. Thanks to the improved throttle response, there are never again long seconds to think when starting off or accelerating. The smart accelerator tuning pulls the Multivan forward with momentum for an even more dynamic start or overtaking maneuver. In addition, the tuning module can be connected to the accelerator pedal in just three steps and is immediately ready for use. You can switch between the different programs to set the response behavior to suit your personal preferences. With the PedalBox, choose between the Sport, Sport-Plus or City program and benefit from pure driving pleasure through modern accelerator pedal tuning. Using the plus and minus buttons, you can fine-tune the PedalBox once again. 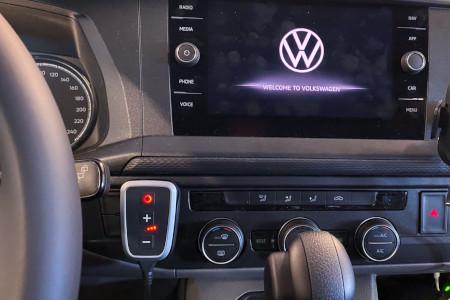 Gas pedal tuning PedalBox for your VW T6
PowerControl X and the PedalBox form the power duo for more performance and make driving even more intense: no waiting time when starting off or accelerating in between. The add-on modules provide a significant increase in performance and improve the reaction time of the accelerator pedal. This gives your Volkswagen an incomparable driving experience for city and highway. Configure your tuning system now.

Operational safety is the top priority for DTE tuning products. With the latest technology of all additional control devices, all protective functions of the motors are retained and the legally prescribed emission values are not affected. To increase performance, all new DTE developments and products are checked using different test vehicles and in accordance with standard test methods on the in-house MAHA dynamometer. DTE Systems also offers a satisfaction guarantee and comprehensive 2 years product warranty which can be increased to an optional 5 years product warranty for all your VW T6 tuning purchases. Further information on the warranty certificate is enclosed with the product.

With the first Bulli in 1950, a world-changing vehicle was created that stands for quality and flexibility. With a length of 5.3 meters, a width of 1.9 meters and a height of 1.9 7 meters, the Multivan finds its use as a van and minibus in a wide range of applications. Due to its versatility, there is a choice of 2.0 to 3.2-liter gasoline engines and 1.9 to 2.5-liter diesel engines to have the right power and performance in the Multivan. Inside, the Multivan offers a flexible rail system to variably adjust vehicle space for more storage or seating for any family outing. For relaxed driving and a pleasant feeling of space, the T6's engine is particularly quiet and dampens engine vibrations. The high level of ride comfort is supported by ergonomic seats and high-quality trim. Using digital technology, the Multivan 6.1 features a Digital Cockpit with We Connect from Volkswagen, which allows the VW T6 to be controlled via smartphone. Modern driving assistance systems round off the digital innovations in the Multivan. With the Driving Assistant, the VW T6 is safe thanks to chassis regulation, an environment monitoring system and parking assistance.