As the most popular car model from the American manufacturer, the Ford Kuga 2 is one of the classic family cars. With an external length of 4.52 meters, the compact SUV has plenty of storage space for families and comes with 176 hp and 240 Nm. Even so, he has a lot of trouble speeding up from 120 km/h to his top speed values. Advanced engine optimization can solve this problem: The tuning systems of DTE systems allow higher performance and faster throttle response. With the premium module PowerControl X, the Kuga 2 is upgraded by +34 hp at +64 Nm for more power even when packed up to the brim. In addition, the compact SUV accelerates way better at higher speed. Accelerating 4.7 s at 80-160 km / h (5th gear), the Kuga 2 finally pulls away in no time at all, even at high speeds. The performance upgrade PowerControl X and the PedalBox form the perfect duo and offer full control over the various performance ranges. Thanks to a smartphone app, you can use the engine tuning system in this way and immediately. 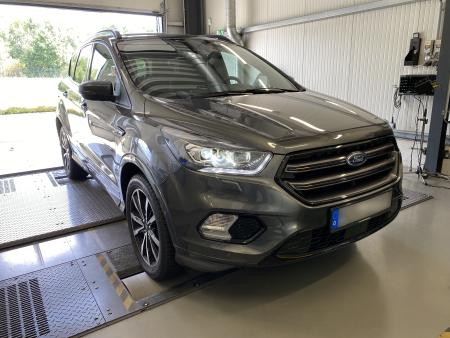 Ford Kuga 2 on DTE's test bench
PowerControl X from DTE optimizes all signals from the engine management and coordinates the control parameters and direct injection as well as possible. This not only gives your Kuga 2 Ecoboost even more power when driving but can also save up to 15 % of fuel. In addition, you can always keep an eye on the important parameters of the service areas and coordinate them with one another. The tuning system can be installed in the engine compartment in no time and can be used immediately. PowerControl X from DTE also includes a comprehensive warranty.

PowerControl X - performance in the Ford Kuga 2 via smartphone

Tuning for your Ford Kuga 2
The tuning box PowerControl X can be easily controlled via your smartphone - conveniently from the cockpit. With the app from DTE Systems, you have complete control over the various tuning programs, and you can adjust your driving style in your own way before each journey. Due to the stress of heavy gifts, you overtake yourself on the highway and country road. The app is very easy to operate using the touchscreen: with a swipe across the mobile phone display, you can instantly change between the Sport, Dynamic or Efficiency program. You can adjust the perceived performance of PowerControl X as required. You can always view all the performance data via the smartphone app for a safe journey.

The PedalBox with app for your Kuga 2
A perfect start with the Kuga 2 even on vacation in the mountains: thanks to the PedalBox from DTE Systems. The Kuga 2 starts to sweat quite a bit when starting up on slopes. Packed with family and suitcases, the heavy SUV only struggles up the mountains and serpentine with a snort. Thanks to the improved throttle response, your Kuga 2 will never be out of breath again. The smart accelerator pedal tuning pulls the heavy compact SUV forward with momentum for a dynamic start. The tuning is connected to the accelerator in just three steps using the simple plug-and-play system and is immediately ready for use. You can choose between the various Sport, Sport Plus or City programs to set up the response behavior to your personal needs. You can fine-tune the PedalBox again using the plus and minus buttons. 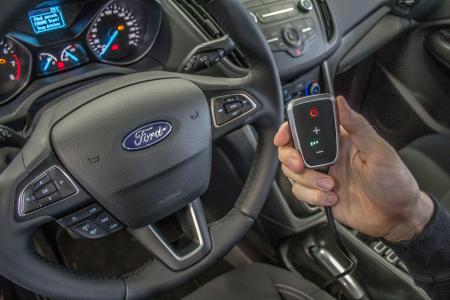 PedalBox with app for your Kuga 2
With PowerControl X and the PedalBox, two powerful tuning systems are combined for even faster acceleration: No second thoughts when starting or accelerating in between. The tuning systems provide more power in the lower speed range and improve the response time of the accelerator of your Kuga 2. This gives your Kuga 2 even more power for long trips, shopping and short trips. Configure your tuning system now.

Operational safety is the top priority for DTE tuning products. With the latest technology of all additional control devices, all protective functions of the motors are retained and the legally prescribed emission values are not affected. To increase performance, all new DTE developments and products are checked using different test vehicles and in accordance with standard test methods on the in-house MAHA dynamometer. DTE Systems also offers a satisfaction guarantee and comprehensive 2 years product warranty which can be increased to an optional 5 years product warranty for all your Ford Kuga 2 tuning purchases. Further information on the warranty certificate is enclosed with the product.

As one of the best-selling Ford models, the Ford Kuga 2 offers enormous space, very good equipment and a wide range of drives. Between petrol, diesel and even in the new variants with a plug-in hybrid, you can quickly find the individually suitable model with enough storage space. No wonder the compact SUV scores particularly well as a family car. The 1.5-liter Ecoboost with all-wheel drive and 6-speed automatic transmission is a real ship. Weighing 1686 kg, it has a strong 176 hp with 240 Nm under the hood and needs 11.4 seconds to go from 0 to 100 km/h. With its dimensions of 4.5 meters in length, 1.8 meters in width and 1.6 meters in height, the Kuga 2 offers enough space for up to 5 people without creating a feeling of confinement. However, it becomes about 0.2 cm wider when the mirrors are folded out, making its width with mirrors 2 meters. Therefore, care must be taken when navigating the compact SUV, especially in narrow streets. Not only does the Kuga 2 offer plenty of space in the interior, the boot volume also brings along decent storage space for luggage or shopping. In total, the boot can hold between 456 and 1653 liters. With its size and power, the Kuga 2 makes an ideal vehicle for family outings and holiday trips - even with a caravan and lots of luggage. However, the roof rack and trailer hitch are not included and must be additionally fitted to the Kuga 2. In the interior, the spacious feeling is retained on the driver's side, despite the equipment: the wide dashboard does not restrict the cockpit at all and is designed rather around the driver so that you have all the important functions in view while driving. In the Kuga 2, however, less emphasis is placed on digital functions and more on analogue buttons. The massive car's fuel consumption is 8.5 to 9.0 liters of fuel. In the 2.0 TDCi diesel variant, it only consumes around 5.9 to 6.2 liters per 100 km.