More power with chip tuning for the Kia XCeed

As a compact SUV, the Kia XCeed seems much smaller, but once you sit in the sporty crossover, you immediately realize the SUV factor. Not only the appearance and quality give the typical SUV comfort, but also the driving performance leaves the Kia XCeed in no doubt. With an output of 160 hp and 253 Nm, the XCeed sprints ahead. Here, the PowerControl chip tuning brings out the true power, for the real driving experience on every journey. The performance enhancement upgrades the 1.5 T-GDI by a sporty +39 hp and +50 Nm. This brings the Kia XCeed to a total of 199 hp and 303 Nm. In addition, the acceleration increases and with adapted driving style in efficiency mode, up to 15% fuel can be saved in the compact SUV. In combination with the accelerator tuning PedalBox, the Kia XCeed unfolds its full potential. Both tuning systems are available for a wide range of Kia models such as the Kia Pro Ceed or the Ceed Sportwagon. 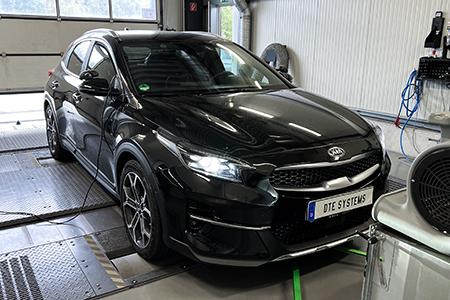 Kia XCeed on DTE's performance dyno
The PowerControl performance tuning brings noticeably more power and torque to your Kia XCeed. The system optimizes all signals from the engine and tunes them to all important parameters. This unleashes the full potential of the Kia for better performance and improved acceleration of 0.8 seconds from 50 to 100 km/h (elasticity measurement on the test bench). In order to be able to adjust the extra power individually, PowerControl can be controlled via app. Here you will also find all the important sports instruments such as turbo pressure, intake manifold pressure and G-forces, so you always have all the performance ranges of the Kia XCeed in view. In addition, every PowerControl X chip tuning comes with a 5-year product warranty.

PowerControl - Up to 30% more power in the Kia XCeeed 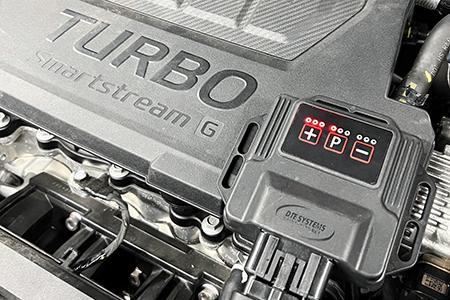 Chip tuning PowerControl with app control for the Kia XCeed
Operate the PowerControl chip tuning conveniently from your smartphone. With the associated app from DTE Systems, you can change all programs at any time and set them up to suit your personal driving style. Switch to Sport mode for full racing power, or be more dynamic on the highway in Dynamic mode. You can even save up to 2 liters of fuel in Efficiency mode. In each mode, the race chip adjusts the combustion accordingly, so that the tuning can be individually adjusted to the vehicle. Via the app, it is also possible to switch the additional power of PowerControl on or off as required.

Start off dynamically with the throttle tuning PedalBox

Throttle response controller PedalBox for your Kia XCeed
Feel the full power right from the start. The PedalBox throttle tuning lets you experience your Kia XCeed in a new way and is installed in just 3 simple steps. Connected to the accelerator pedal, the throttle response controller is immediately ready for use and boosts the pulling power of your compact SUV. With the improved accelerator pedal curve, your Kia is faster forward. If you previously had to wait at traffic lights or overtaking on the freeway dragged on, your vehicle now pulls past everyone in no time at all. Sport, Sport-Plus and City programmes are available to give you the perfect response for every driving situation.

Give your Kia XCeed full power 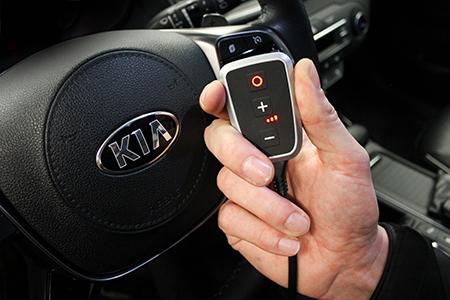 PedalBox for your Kia XCeed
Combine the power of two tuning systems. Chip tuning and throttle tuning turn your Kia XCeed into a sportsman on the road. No more thinking seconds until full power and more acceleration on the freeway. You decide for yourself whether you want to reach your destination even faster or save fuel on leisurely long journeys. For a new driving experience in your vehicle. Configure your Kia XCeed tuning now.
Configure now!

Operational safety is the top priority for DTE tuning products. With the latest technology of all additional control devices, all protective functions of the motors are retained and the legally prescribed emission values are not affected. To increase performance, all new DTE developments and products are checked using different test vehicles and in accordance with standard test methods on the in-house MAHA dynamometer. DTE Systems also offers a satisfaction guarantee and comprehensive 2 years product warranty, which can be increased to an optional 5 years product warranty for all your Kia XCeed tuning purchases. Further information on the warranty certificate is enclosed with the product.

DTE's Kia engine tuning is available for the following models: