Sporty, elegant and dynamic - the Ford Mustang is one of the classic American sports cars with a lot of power and speed. With an engine output of 317 hp and almost 800 hp, the Mustang brings racing fun to the road. Already the Ford Mustang Ecoboost with an output of 317 hp and 421 Nm shows itself on the road as a predator among the sports cars. Through advanced engine optimisation, the power of the Mustang can be increased even further: DTE's add-on control units enable higher performance and faster throttle response. With the premium PowerControl X module, the Ford Mustang 2.3 Ecoboost receives an upgrade of +60 hp at +120 Nm. In addition, the sports car shows significantly improved acceleration at higher speeds. The PowerControl X performance upgrade and the PedalBox thereby form the perfect duo for all Ford models and offer full control over the various performance ranges of your vehicle. Thanks to a smartphone app, you can easily operate and instantly adjust the engine tuning system. 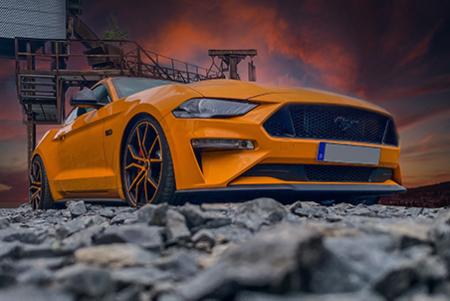 More driving fun in the Ford Mustang
PowerControl X from DTE optimises all signals from the engine management and matches the control parameters and direct injection in the best possible way. This not only gives your Ford Mustang even more power when driving, but can also save up to 15% fuel. In addition, you can always keep an eye on the important parameters of the performance ranges and adjust them to each other. The chip tuning system can be installed in the engine compartment in no time at all and can be used immediately. PowerControl X from DTE also includes a comprehensive warranty.

PowerControl X – Performance in the Ford Mustang via smartphone 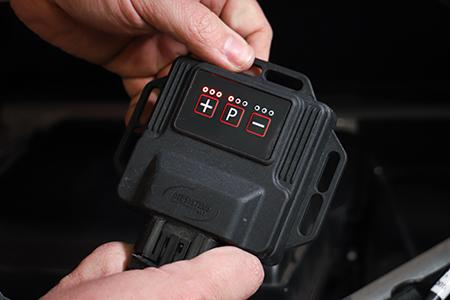 Chip tuning for the Ford Mustang
The PowerControl X performance upgrade in the Ford Mustang can be easily controlled via your smartphone - from the comfort of your cockpit. With the app from DTE Systems, you retain complete control over the programmes at all times and can adjust them to your personal driving style before every journey. Acceleration at high speeds allows you to overtake easily on motorways and country roads. The app is very easy to operate via touchscreen: With a swipe across the mobile phone display, you switch instantly between Sport, Dynamic or Efficiency programme. You can activate or deactivate the additional power of PowerControl X as required. You can view all of your vehicle's performance data directly via the smartphone app.

PedalBox in the Mustang - optimise the response

PedalBox with app for your Ford Mustang
Take off with your Mustang: thanks to the PedalBox from DTE Systems. Thanks to the improved throttle response, your Mustang will never be out of breath again. The smart accelerator tuning pulls the sports car forward with momentum for an even more dynamic start. Thanks to the simple Plug&Play system, the PedalBox is connected to the accelerator pedal in just three steps and ready to go. You can choose between the different Sport, Sport-Plus or City programmes to adjust the response behaviour to your personal preferences. Using the plus and minus buttons, you can fine-tune the PedalBox once again.

The mighty power duo for the Ford Mustang 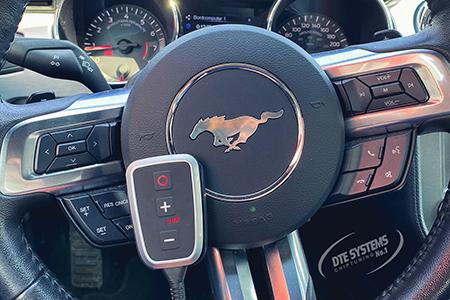 PedalBox for your Ford Mustang
PowerControl X and the PedalBox combine to create a powerful power duo in the Ford Mustang, for even faster acceleration: No long thinking seconds when starting off or intermediate acceleration. The tuning systems provide more low-end power and improve your Mustang's throttle response time. This gives your Mustang even more power for trips, shopping and short-distance driving. Configure your tuning system now.

Operational safety is the top priority for DTE tuning products. With the latest technology of all additional control devices, all protective functions of the motors are retained and the legally prescribed emission values are not affected. To increase performance, all new DTE developments and products are checked using different test vehicles and in accordance with standard test methods on the in-house MAHA dynamometer. DTE Systems also offers a satisfaction guarantee and comprehensive 2 years product warranty, which can be increased to an optional 5 years product warranty for all your Ford Mustang tuning purchases. Further information on the warranty certificate is enclosed with the product.